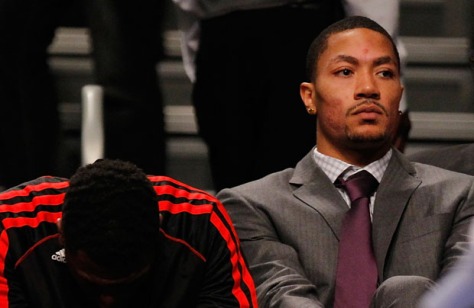 This morning, our worst fears were confirmed–Derrick Rose will not play again this season. After undergoing successful meniscus reattachment surgery, Rose will be out 4-6 months and the Bulls have already announced he won’t return this year. I had originally hoped Rose wouldn’t need a full reattachment and could return sooner, but since the initial diagnosis it had become clearer and clearer where the situation was headed. Now, the Bulls must move on without Rose.

The most important thing is that Rose’s knee will be perfectly fine. The full reattachment is done to ensure no issues going forward and without any return to action until presumably next October, Rose will have plenty of time to let his surgically repaired knee heal (again). As I noted earlier over the weekend, Russell Westbrook suffered a similar meniscus tear and is back to his old self lately, tearing it up with Kevin Durant. While I’m confident that this injury doesn’t spell doom for Rose, I’m not as sure that Rose’s style doesn’t either. Derrick plays violently, twisting and contorting his body to avoid contact and fit into impossibly tight spaces. For the first part of his career, this was a joy to watch. Rose always bounced back up and basically didn’t miss any games. However, his violent style has caught up to him. Just looking at the way Rose runs is positively terrifying for a Bulls fan. He jumps and cuts in very unorthodox ways, often landing on his heels or his toes (NOT good). Obviously, Rose will once again have plenty of time to adjust his game. I’m just not confident that this is the kind of thing Derrick will ever be capable of changing.

So, what are the Bulls gonna do? They basically have two clear options: stand pat, or tank. The first option is familiar; it’s exactly what Thibs and co. did last year. With three All-Stars in Carlos Boozer, Luol Deng and Joakim Noah, the Bulls have more than enough to win with* in a hilariously bad Eastern Conference. After Indiana, Miami and maybe Atlanta, the Bulls as currently constructed are probably still the fourth best team. The Knicks and Nets look like absolute train wrecks with serious injury concerns of their own. After that, we’re looking at teams like Philly, Toronto, Charlotte, Washington, Detroit and Cleveland. Should I continue? The point is, the Bulls don’t lose much in the seeding with Rose’s injury. What they do lose, unfortunately, is any shot at winning a championship this year. That’s why this option is pretty unappealing; the best case scenario is a second round slaughter at the hands of Miami or Indiana.

Tanking is all the rage this year and the Bulls no doubt are at least considering it now. Luol Deng will be a free agent at season’s end and it’s difficult to imagine Carlos Boozer in a Bulls uniform next year as well. With the new CBA, teams that are over the luxury tax line for three years in a row must pay insanely exorbitant luxury taxes. To put it simply, right now, teams that go over the tax line pay a good amount of extra money on top of their player salaries. With the new restrictions, that tax money will get a lot bigger. Thus, the Bulls (not just because they have a cheap owner) need to get under the tax line either this year or next year (they paid last year). Trading big salary players would accomplish that. The Bulls front office undoubtedly would kill for a lottery pick this year, but they’ll probably have to settle for any kind of first rounder for Luol Deng. As for Boozer, a trade would have to be pretty ugly. Joakim Noah’s name will come up to, but the Bulls would likely want a good chunk in exchange for him. If the Bulls elect to tank this season, expect them to trade away their healthy All-Stars for future assets and/or expiring contracts that will clear the books sooner. If this does happen, Tom Thibodeau will be fucking PISSED. Thibs coaches to win and his players know and love that. Gutting the team on purpose would go against everything that Thibodeau instills in his players from day one of training camp. Considering that Thibs relationship with the front office is already strained, another conflict could be disastrous.

At the end of the day, I think the Bulls will lean toward competing this season but find a middle ground. I expect at least one of the Bulls healthy starters to be moved, with Deng being the most likely. The remaining talent will still be enough to push this team into the playoffs, especially with Thibodeau at the helm. It’s gonna be another very long year without Derrick. The front office and fans need to start envisioning a future that doesn’t depend solely on Rose and this current core because those days are unfortunately over.

2 thoughts on “Here We Go Again: Rose Out For Year”