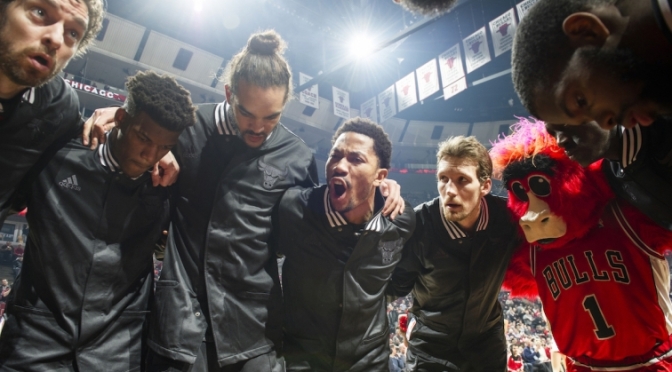 We may be a hair more than a quarter through the Bulls season, but the (D)Roses and Thorns crew thought it to be an ideal time to check in on some of the biggest storylines and issues surrounding the team. At 14-8, the Bulls have notched a solid record, but below the surface plenty of problems lurk. Without further ado, let’s take a deep dive. 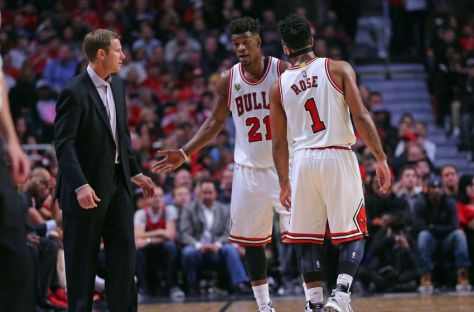 When coach Fred Hoiberg was hired to revamp the vanilla offense, I envisioned the Bulls playing a style reminiscent of the Warriors or the 2014 Spurs. Coach Nick from BBallBreakdown had me salivating at the possibilities. The Bulls boast two starting guards fully capable of running the pick and roll and enough shooters on the roster to facilitate an open style of offense.

A quarter of the season is behind us, and it’s time to wonder if the much ballyhooed offensive revolution will take place this year. The Bulls are currently only scoring 98 points per 100 possessions, the 27th lowest efficiency in the league! Only Philadelphia, Brooklyn, and Kobe’s Lakers are lower. How is it possible that the Bulls, who ranked 10th in offensive efficiency a season ago, can be so bad with the exact same cast of characters?

Through twenty games, the offense has been stagnant, unimaginative, and very, very guardable. The offense ranks 15th in frequency of shots taken by a player who has held the ball six seconds or longer and has dribbled the ball seven or more times. They are 26th and 30th, respectively, in eFG%. The offense that was supposed to be predicated on fast action and unpredictability is disappointingly middle of the pack in the shots it should desperately try to avoid.

Unfortunately, there is a single culprit most responsible for these embarrassing trends and his name is Derrick Rose. The Bulls starting point guard, who sports a team high usage rate of 24.9%, has been one of the least efficient players in the NBA this season. His propensity to pound the rock before making any decisions is not doing anything to help.

As of Friday, Rose is attempting 3.6 shots per game where he has dribbled seven or more times before the shot, the 15th highest average in the league. Of the 46 players to average two or more of these shots per game, Rose is dead last in eFG%. Rose shoots the ball 4.2 times per game after holding it for six seconds or longer, again the 15th highest average in the league. He’s 52/53 in eFG% on those shots (minimum two attempts).

The argument could be made that the majority of these shots are drives to the basket that produce foul shots, a category not factored into eFG%. But Rose on the season has a free throw rate of just .168, the lowest rate of his career. Rose is one of just five players to use up 23% of his teams’ possessions and have a FTr below .170.

Rose should continue to play aggressively and attack the basket often. He just needs to do it in the natural flow of the offense. If and when Rose figures this out, he’ll be able to attack defenses before they can react and recover to the action that precedes the drive. But until then, this offense isn’t getting any better.

Through the first quarter of the season, the Bulls have been a perplexing mix of mediocre on the floor and somehow managing to win 14 games and sit just one game behind Cleveland in the Eastern Conference. Before Monday’s matchup with Philadelphia, the Bulls have a strength of schedule rating that is below just a handful of teams (New Orleans, Memphis, Sacramento, Brooklyn, and they are tied with Charlotte), and their RPI is third in the NBA (take a look here).

Coming up in the next quarter of the season, the Bulls will see the Warriors once, on January 20th and they have eight games against teams who currently have more wins than they do. While this upcoming stretch of 20 or 21 games might seem like it will be relatively easy, games against the likes of Oklahoma City, Dallas, Indiana, Detroit, and Boston spell the possibility for the Bulls to lose a lot of ground in the standings.

Whatever the case, the Bulls are a team that is finding its identity, largely due to a new coach in Fred Hoiberg who is operating with players who have spent years under Tom Thibodeau’s leadership, so transitioning can be quite difficult. I suspect that it will be a season or two before we see what a Hoiberg Bulls team will really look like. In the rest of this season, it is hard not to expect them to falter at least somewhat.

It’s no secret that the Bulls haven’t had success offensively this season, at 27th in offensive efficiency. Mainstream thought is that Hoiberg has been searching desperately for something that works, but is there truth to this?

Hoiberg has utilized just 120 different 5-man lineups, the third-lowest number of lineup combinations in the league, with the average at 170. So what’s the hold up – why hasn’t he tried more? A few answers to this: 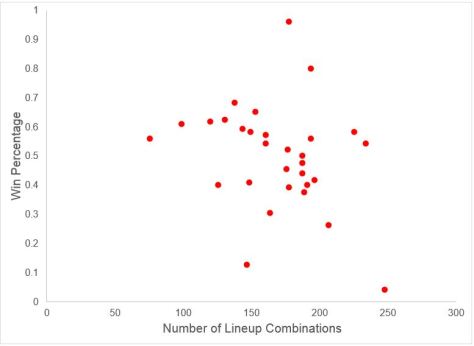 When the lineup data is filtered for greater than or equal to five games played and averaging more than three minutes per game (we’ll call this High Use Lineups or HUL), the data gets a little more telling. The Bulls are tied for the sixth-highest number of lineup combinations, at ten, under the HUL model. Although there still seems to be no correlation between win percentage and number of HULs, the HUL model would indicate that the Hoiberg staff is trying to find something that sticks, which tells a different story than the initial look at the unfiltered data might indicate.

So which lineups have given the Bulls the most success, and which have hurt them? How do the dynamics change when you add or subtract a key player, and what can we expect to see from the Bulls going forward? Let’s take a look, using the HUL model:

Over the last nine games, the Bulls have had a healthy dose of Butler/Gasol/Gibson/Rose/Snell, and the same lineup substituting Mirotic for Gibson. Combined, these two lineups are -0.7; we may not see as much of this in the future. Instead, I expect to see more of what we saw Saturday night against the Pelicans and Monday vs. Philly: more Noah, more Brooks, more McDermott.

Coming into this season, Bulls fans hoped an offseason of rest would rejuvenate Joakim Noah to get him back towards his Defensive Player of the Year, fourth in MVP voting ways. After watching Noah hobble through the playoffs last year, this Bulls team knew it needed more coming into this season from its heart and soul. At the quarter-pole of this season, fans and management alike are still searching for that man.

Unfortunately, for much of the year Noah has looked anything but rejuvenated as father time doesn’t appear to be on his side. Noah has not started a game and is averaging a career-low 3.8 points per game. While his numbers are horrid, Noah still remains a very influential Bulls player.

Noah is the most vocal leader on this team, and it is often his hustle that sparks and re-energizes them. To illustrate the importance of an effective Noah, one need not look further than his performance in wins vs. losses. Going into Monday, in wins, Noah is averaging 23 minutes per game, 45% shooting, and 10 rebounds per game. Compare that to 19 MPG, 20% shooting, and 6 RPG in losses and it is evident that this Bulls team needs Noah to be on the court and effective to be at its best.

The problem has been who to play Joakim Noah with in the front-court. When he plays with Pau Gasol, you have two big guys who clog up the lane which creates poor spacing. When Noah matches up with Gibson, the Bulls are stuck with two defensive minded big men who both struggle to score. A recent lineup shakeup now has Noah matched up with Niko Mirotic off the bench, a promising development.

Noah is set to become a free agent at the end of this year and is currently making over $13 million a year. While he certainly won’t make that kind of money in free agency the Bulls have a decision to make. Noah makes the Bulls’ motor run, but is a 31-year-old center with a history of injuries and a lack of offensive ability worth bringing back? 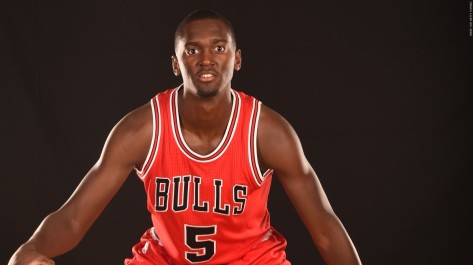 The Bullies have been frustrating in the first quarter of this season, it doesn’t take an expert analyst to tell you that. Coming into the season with such high expectations, I did not think they would produce such a lackluster effort on a nightly basis. As the season goes by, it’s starting to become quite difficult to watch them without breaking something in the room. After the games where the Bulls just decide not to show up, I always find myself screaming at Freddy Hoiberg through the TV, “WHY WON’T YOU PLAY MY BOY BOBBY PORTIS!”

Before I wrote this, I looked up Bobby’s stats this season. Going into Monday’s game, Fred has played Portis a whopping 22 MINUTES……THE ENTIRE SEASON! Personally, I find this stat quite mind boggling simply because there were moments where we could have actually used Crazy Eyes out there for brief stints. Below are my three reasons why the Bulls need to start giving Portis some tick:

As you could see in the preseason, much of Portis’s success came from hustling and being a maniac. He was all over the court, grabbing rebounds, diving on the floor, keeping possessions alive, and most of all just giving the team much needed energy. There have been too many instances where the Bulls have started a game flat or have had in their in-game lulls. These are perfect times to play BP!

Portis is by no means a marksman, but he has shown to at least be a respectable shooter in this league thus far. Since the defense is forced to respect his shot, driving opportunities will naturally occur for Rose and Butler, and even create space for Gasol to post up. With the disappointing start of Mirotic, Portis is even more deserving of some PT at the power forward spot. And not to mention, he is a very good free throw shooter.

This offseason, the Bulls could possibly lose two of their main big men due to free agency. With Jo in his contract year and Pau having the ability to exercise his player option, the currently log jammed Chicago frontcourt could become suddenly wide open. In the event we lose one or both of these veterans, the Bulls need to get an idea of what type of player they are going to get out of Portis, and the only way to do that is to get him out on the court. If Bobby can show flashes his rookie season, the Bulls can then pass on overpaying Noah and won’t feel bad if Pau decides to walk away from the team. This obviously creates more flexibility for the Bulls moving forward giving Gar Forman and John Paxson a lot more cap space to work with.

Now I’m not asking for Bobby to get significant playing time, I would just like to see him at least crack the rotation. It can only have a positive effect on the organization, in both the long and short term. But in order to reap these benefits, Fred must simply #FreeBobbyPortis.