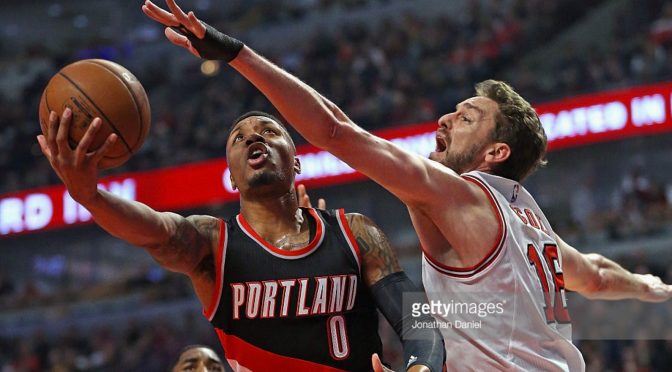 A night after getting trounced in Atlanta and hosting the red-hot Portland Trailblazers, the Bulls were in a tough position on Saturday night. They went down big at times in the first half and entered the break losing 51-41. They used a solid third quarter to get back in the game but couldn’t find enough late to complete the comeback. They stuck with the fast-paced Blazers til the end, but ultimately came up short, losing 103-95.

While Kobe Bryant‘s retirement tour is dragging on a little more painfully than some of us would prefer, the Mamba’s last game in Chicago was a delight. Bulls fans came prepared to cheer Bryant toward retirement, and Kobe delivered a few vintage moments in response. Ultimately, the Bulls were too much for Byron Scott‘s atrocious defense, prevailing 126-115.

The Bulls are simply not a good team right now. They’re missing their best player, Jimmy Butler, as well as the heart of the team and a key defensive contributor in Joakim Noah. Nikola Mirotic somehow had a complication from his appendix surgery (only the Bulls), meaning he won’t be back anytime soon either. With a roster that is clearly flawed at full strength, the Bulls have slipped deep into a dangerous place while trying to fend off the injuries. The rest of this year should be more focused on the future than the present.

While many front offices might look at the factors in play and decide to trade some impending free agents and slip into the lottery, the Bulls…did nothing. Kirk Hinrich was shipped away as a salary dump, a surprising but nonetheless confusing move for Gar Forman. Moving Hinrich amounts to nothing more than a money saver for Jerry Reinsdorf, but it also underlines the Bulls’ clear understanding that they lack a championship roster. There were no major rumblings of win now moves, and the Bulls disappointingly passed on trading Pau Gasol. The latest out of Chicago is that re-signing Gasol is a top priority for the team. Gar is also denying calling this a championship roster in the preseason, so I guess we all just imagined that together! Let’s get to the BULLets before I lose my mind.

The Bulls are a trainwreck right now, in too many ways to count. Their stretch of nightmare play continued last night with a disheartening 113-90 defeat to Atlanta on the United Center hardwood. Not even returning home from a seven game road trip mustered enough out of the Bulls, who were loudly and understandably booed by the home crowd throughout the fourth quarter.

After dropping two in a row, including an ugly loss Friday night in Boston, the Bulls went into Cleveland as big underdogs. With Tyronn Lue taking over for recently fired head coach David Blatt, the Cavs were expected to reassert their dominance in a comfortable double-digit victory over the Bulls. Instead, Chicago pulled out an impressive 96-83 win on ABC primetime.