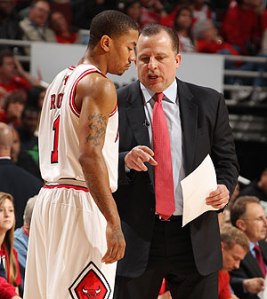 Tom Thibodeau will be suiting up in some new colors.  And those colors will bring a joyful tear to your eye as you wrap yourself in Ol’ Glory and sit down for another edition of Team America versus the commies (cue the Rocky IV training scene).

Our beloved leader has been named Assistant Coach for the United States 2016 Olympic team, under the direction of living legend Mike Krzyzewski.  Coach K said it was because of his defensive mentality and the fact that “nobody wants to play the Bulls”.

Oh Captian, My Captain (skip to 3:15). Tommy Thibs is he best thing to hit the sidelines at the Madhouse since the Zen Master himself.  Through the ridiculous ups and downs of the last two seasons. Through the Nate Robinson games that had you scratching your head, and the much more popular Nate the Great, “holy shit did he really just hit that shot” games. And everything in between, there has been one constant for the Bulls—Tom Thibodeau.

Is there anything this man cannot do? He has turned every single role player into a weapon. And don’t tell me it’s not the system.  You bet your ass it’s the system.  Crippled by an entire Roseless year (let’s not talk about it), he has somehow kept the ship afloat, squashed the Nets and put up a fight (somewhat) against LeBron and the Heatettes.

This experience is going to be a major asset for the Bulls.  Not only is it an honor to have him represent the good guys, but also the next step in the maturation of a great coach.  This will be a fantastic stepping stone to jump to the elite level.  He will be coaching the best talent in the world and will get the opportunity to study under Coach K.  This may lead to an easier time picking up another player to join DRose at the 2-guard position.

All that is left is for him to grow out a nice power stache to join the ranks of famous mustachioed Chicago coaches.  Coach Q, Ditka and Phil Jackson have already figured it out. Any word on Thibs coaching Seal Team 6, off the record? Wouldn’t shock me in the slightest.