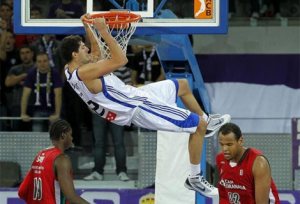 On June 23, 2011, with the 23rd pick in the NBA draft, the Chicago Bulls selected Nikola Mirotic. Without ever having stepped onto an NBA court, the 22 year old Spaniard of Montenegrin decent has become one of the most hyped names in basketball. Every time a trade rumor pops up online about the Bulls, Mirotic is inevitably mentioned as a huge cog in a deal that could theoretically send a big time talent back to the Windy City. So what’s all the excitement about?

Mirotic currently plays for Real Madrid, the same team he began his professional career with. In his first season playing professionally, Mirotic won the Euroleague Rising Star award. This type of early buzz is what led the Bulls to spend an incredibly valuable first round pick on a player they knew wouldn’t come to the States for several years.

Mirotic is listed at 6’10” and his natural position is power forward. But he’s not a traditional big guy who is wary about leaving the paint on offense. Mirotic is an accomplished shooter who has averaged about 37% on his three pointers during his brief career. The stretch four is the hottest commodity in the NBA. With the rise of the statistical revolution, the emphasis on the three point shot has greatly increased (for those wondering why, 3>2). Mirotic, while still very young, inevitably will draw some comparisons to German superstar Dirk Nowitzki, the prototype of the stretch four and the guy who paved the way for big European shooters to make their presence felt in the NBA.

Many people believe that the Bulls will be very reluctant to part ways with Mirotic, despite the fact he has been completely untested by the best competition in the world. The Bulls likely view Mirotic as the long term replacement for Carlos Boozer once his contract either runs out or he is released via the amnesty provision. Mirotic would act as an ideal foil to the defense first Taj Gibson and could likely slide over to the five if necessary for stretches of games simply because Taj is such an animal on defense. Mirotic is also likely to be on the receiving end of many a drive and kick from Derrick Rose, who will in turn appreciate less traffic in the lane thanks to the shooting prowess of Mirotic.

Unfortunately for Bulls fans, Mirotic is unlikely to come across the ocean anytime soon. His current contract in Spain pays him more than what he is allotted due to his draft slotting. He also would cost quite a bit to buy out from his Real Madrid contract, a fee Bulls owner Jerry Reisndorf is unwilling to pay.

Whenever he gets here, it will hopefully be well worth the wait. With DRose entering his prime years, Mirotic looks to be a key cog in the long term success of the Chicago Bulls. 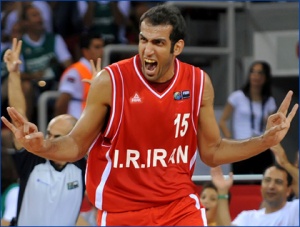 While I didn’t write over the weekend, I can assure you there’s a good reason for my absence.

By now, you know that I like writing about things that you cannot find anywhere else.  Having said this, stories that intrigue me don’t necessarily pop up all at once.   A great deal of patience is necessary.  Luckily for you, one of the tales occurred over the weekend.

What: The Fiba Asia Championships

Where: Somewhere in the Philippines

Why: Because nothing else of consequence is going on

Last evening (or morning depending on your worldly location), Iran knocked off the Philippines in the tournament’s championship game 85-71.

Yep, apparently there are gymnasiums in Iran that aren’t used to house nuclear warheads…

While I might come off as a tad harsh, I wrote this article in celebration and respect of the game of basketball.  No goat jokes, Stavi.

In all seriousness, there were some highlights in the tourney.

1)Yi Jianlian and the Chinese team lost to Cinderella (or Cindererra) story Chinese Taipei in a huge upset.

2) Jarvis Hayes, formally of the United States, suited up for the Qatar National Team.  Ironic considering the fact that he’s currently employed by Ironi Ashkelon, an Israeli Team.

4) But most importantly, tournament MVP Hamed Haddadi showed the world he’s still got something in the tank.

The Iranian Center averaged 18.8 points and 10 rebounds throughout the tourney, helping his country win its third FIBA Championship since 2007.  An accolade the Iranian government wouldn’t trade for anything on the planet.

Joking aside, Haddadi’s play in the tourney might have gotten him another ticket to the NBA.

From this Bulls’ fan perspective, we could probably do worse.  The guy’s a thick 7-2 and surely can move it better than Nazr Mohammed.

Throughout the course of Haddadi’s career, the Ahvaz, Iran native has played for the Memphis Grizzlies and Phoenix Suns.

While I haven’t personally asked Haddadi how he’s enjoyed his time in the States, I’d be willing to venture that he didn’t enjoy his time with the Dakota Wizards…

In limited playing time, Haddadi was actually decently productive in the Valley of the Sun (the U.S. version).  In 14 minutes per game, he averaged 4.1 PPG 5.2 RPG and 1.2 BPG.  In other words, the Bulls could do worse.

If nothing else, the big guy deserves a try out.  To be completely honest,  I think that Haddadi has more in the tank than notables Marcus Camby, Louis Amundson or any other schmo the Bulls have considered for their final roster spot.

Guys, were you expecting to hear me endorsing an Iranian?  Don’t ever call me ignorant or unaccepting again.

Regardless of the geopolitical situation, basketball is basketball.  If the guy can ball, I’d give him a shot if the guy were purple.

So, Gar, “Ladi-Dadi bring in Haddadi” for a tryout.

Have a nice day,

P.S. I’m accepting nominations for the Nobel Peace Prize as of an hour ago.

Nikola Pekovic’s pinky toes are manlier than your biceps, glutes and nuts combined. The dude is a wall of beautiful Montenegrin steel. In 2011-12, Pekovic burst onto the scene out of nowhere as a quality rebounder, inside finisher and interior defender. In fact, he helped carry my bruised and battered fantasy team to a face-saving second place finish. Thanks, Nik! His bruising style of play meshed well with Kevin Love’s finesse. Last year, Pekovic continued to improve, averaging 16.3 PPG and 8.8 RPG as the Wolves’ only reliable big man.

Assumed to be another foreign big with no hands, Pekovic proved that he has a soft touch at the rim as well as the ability to bang in the post with any center. The only knock against Pekovic is that he’s battled a litany of minor injuries throughout his career. Even so, none have been more severe than a sprained ankle and Nikola is tough as nails. A big man that can play at a high level on both ends of the floor is valuable; Tiago Splitter, an undoubtedly less talented player, just scored $36 million on the same RFA market Pekovic is in. As such, Pek should receive an offer of at least four years, $40 million and Minnesota needs to match it. However, at the time of writing, there’s been basically zero buzz surrounding Pekovic. Why is that? One possible reason is that Pekovic has always planned on staying up north and is negotiating* a new contract as we speak.

Regardless, I can’t foresee a situation where Pekovic receives any less than the aforementioned $40 million. Two way big men don’t come around often, and the Wolves have one in their lap. I’d be shocked if Pek isn’t in Minnesota next fall, but crazier things have happened.

*-negotiating? Nikola Pekovic laughs at your negotiations. Now sit down and sign that contract in your blood, Flip. 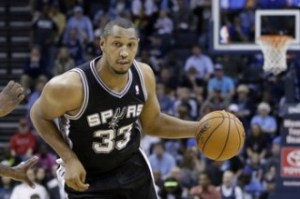 Weight: 265, but 235 on Wikipedia because Boris must have personally written his profile page.

Here at DRaT, we like to cover all facets of the NBA.  We cover Lebron, we cover the Birdman and it’s only fair, we cover Big Boris.

With all the explosive athleticism the Frenchmen has displayed throughout the NBA Finals, you might wonder about the origin of his innate ability.  While I wish I were lying, Diaw is actually the son of a Senegalese long-jumper and the most prolific female center in French basketball history.

Diaw has had quite the career.  In 2003, he was drafted 21st overall by the Atlanta Hawks.  Two seasons later, he was shipped with two first round picks for the then underrated Joe Johnson (now an oxymoron).  In his first season with Phoenix, Diaw won the  NBA’s most improved player by averaging 13.3 points, 6.9 rebounds and 6.2 assists.

Possessing the ability to guard 1 through 5, Boris was an extremely vital piece for a team that sported Steve Nash and Amare Stoudemire during their prime years.  With Diaw, the Suns were a force year in and year out in the Western Conference.

But that period of his life is now over.  It is no longer 2006 and Boris cannot defend 1 through 5. Not well, at least.

In 2008, Diaw was shipped to Charlotte for J-Rich and Jared Dudley.  He then proceeded to put every buffet in the greater Charlotte area out of business.

But now in 2013, Bulging Boris has been productive.  While it’s pretty funny watching his moobs flap as he soars for a board, he really isn’t the worst.  Throughout the playoffs, he’s averaged roughly 4-2-2 in 16 minutes a game. In fact, Diaw exploded for 9 points in Game 4.  Not bad for a guy who’s carrying the weight of the world in his butt cheeks.

Boris, we love you here at DRaT.  Take the abuse with a grain of salt and continue to do Boris things on the court.

Throughout his entire career, Boris has given you a little of everything.  Here at Droses and Thorns, we’re trying to do the same.