The Chicago Bulls ended their season on a high-note, winning in comeback form over the historically bad Philadelphia 76ers (10-72) 115-105 at the United Center Wednesday night. The Bulls ended the season a disappointing 42-40, a record that would’ve made the playoffs in the East most other years.

Chicago, losers of three straight, should have come into Philadelphia with laser focus and turned the game into a blowout before halftime. Of course, these are the Bulls, notorious for playing up or down to their competition. While a cleanly won rout would have been better for my cardiovascular health, at least I was treated to an inspiring comeback and a memorable performance from Jimmy Butler.

53 points on 30 shots is some David Blaine shit

I really am amazed by Butler. He's got a bruised thigh, a bum ankle. Leads the league in minutes and miles run. So much energy every night! 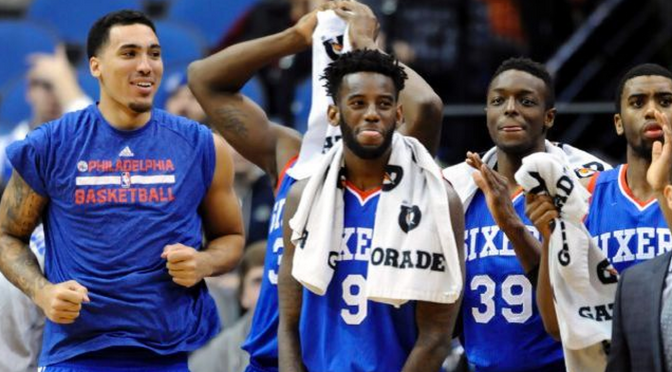 For some reason, Madonna’s hit song from 1984 was running through my head after the Sixers had won their first game to quietly evade history: “Like a virgin, touched for the very first time.” It kind of perfectly encapsulates the season thus far. The Sixers are a team without any experience, and a large bulk of the players on the team had never even won an NBA game before Wednesday. And in case you were wondering, no, I don’t have any qualms comparing my team to a Madonna song.

I know we shouldn’t be celebrating a team that had lost 17 straight games and who narrowly avoided one of the more embarrassing records in NBA history (18 straight losses to begin a season). But sorry I’m not sorry. This win actually felt great as a long suffering Sixers fan. It just felt like a huge chip had been taken off the city’s shoulder. Of course we understand the long term goals of the Sixers and there is virtually no difference between starting 1-17 and 0-18 but as fan you really start to feel and empathize with these players. Regardless of how much talent they lack, they give 110% night in and night out because most of these guys are just trying to stick around in the NBA for more than a couple months.

Michael Carter-Williams is a guy you have to feel for. He’s a true NBA talent and if you watch you can sense the mounting frustration that piles on him every day. He’s going to incur a lifetime of putrid NBA basketball games before the Sixers final roster is complete in a few years. They say in sports there are also moral victories; I think this win belongs in that category as well for MCW. It was also great to see this team get a win because they have been close so many times and the streak needed to end.

This is typically how I am forced to watch Sixers basketball:

Wednesday’s game against Minnesota could also be described as one of the worst basketball games ever played. The first half ended at a paltry 34-32 and there were more turnovers in this game than in a Dutch bakery. But that was actually a perfect recipe for the Sixers to finally chalk one up in the win column.

The Sixers had given up a double digit lead in the first half and I kind of thought the inevitable was going to happen: the T’Wolves would regroup and take out the Sixers. There are certain things you can count on in life; death, taxes, and the Sixers losing in terrible fashion. My expressions during this game were varied. I started out hopeful, then sank into despair, and this finally turned into ecstasy.

There were some unlikely heroes. How about Robert Covington? If you don’t know who Robert Covington is, I’m not going to crucify you because I didn’t know who he was until a few weeks ago. But he’s actually a pretty accomplished NBA D-League player (huge oxymoron), so he was a perfect fit for the Sixers. He came into the game in the fourth quarter and was unconscious and knocked down some critical three point shots for the Sixers. The Sixers were holding a six point lead inside one minute and to tell you the truth I kind of expected them to lose still. Somehow, Mo Williams was going to hit a three with MCW in his face and then steal the inbounds and do it all over again like he was a reincarnated Reggie Miller. But for once the Sixers held on and I couldn’t be happier.

The Sixers represent Happy Gilmore, the most unconventional golfer of all-time. The Sixers are the most unconventional team ever assembled in the NBA. Unconventional in terms of assembling a team with no talent or chance of winning games, when all other teams are trying to do the complete opposite. Happy’s final putt kind of represents this Sixers-TWolves game. The Sixers are looking at this huge obstacle (setting a bad record) in front of them. Happy’s shot takes all kinds of twists and turns, and the crowd is just in this awkward gaze. This is similar to watching the Sixers; many times I catch myself with just a stunned look at watching the reckless abandon and complete lack of basketball IQ they play with. Then finally when the putt sinks you can’t help but to feel overwhelmed with joy and amazement. I had to kind of pinch myself after the Sixers game had ended to make sure they actually won. I couldn’t help but to get up off the couch and celebrate, also because I don’t know how many more times I’ll be able to do that this season.

This win will likely amount to nothing, and when they play the Thunder on Friday they will most definitely get blown out. However it was fun to bask in this win for about 48 hours and I know Brett Brown will be giving this speech in the locker room before the next game.