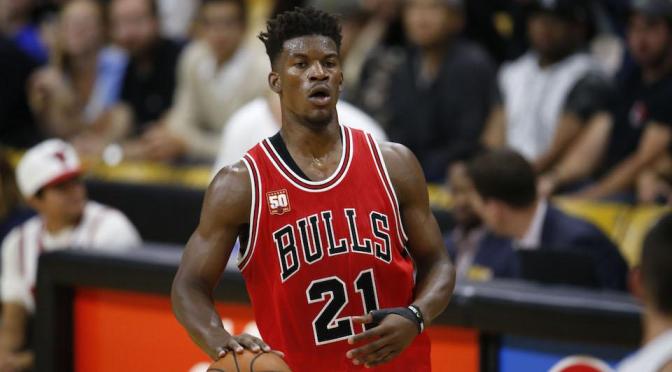 After two quality wins against the Raptors and Pacers, the 18-12 Bulls find themselves in fourth place in the Eastern Conference, just three back of the first place Cavaliers. After a rocky stretch last week, the Bulls still find themselves in good playoff position. This is especially impressive in the much improved East.

The biggest contributor to this Bulls success through the first 30 games of this season has been Jimmy Butler. Butler, an All-Star last season, is averaging a career high 21 points and 3.6 assists per game along with 4.9 rebounds. He’s stepped up his counting stats on the defensive end by snagging 1.9 steals per game, the eighth most in the NBA, and blocking 0.9 shots per game.

Despite the incredibly strong play from Butler this season, the fifth-year guard has not been able to evade the criticism of the media. The grumblings all began after Butler foolishly called out his coach to reporters in the locker room following a dispiriting loss to the New York Knicks. After dropping a quadruple overtime game to Detroit the night before, Butler was extremely frustrated by the lackadaisical play of his teammates and bluntly stated “we have to be coached a lot harder at times.” This statement by Butler kicked off a flurry of reports about how Butler, the recent recipient of a 95 million dollar contract, has changed. The once humble boy from Tamball, TX has been replaced by a man eager to seize a leadership position on this veteran-laden team.

I take no issue with Jimmy seeing himself as the leader of the team. He is without question their best two-way player, and nobody on earth can question the former 30th pick in the draft’s work ethic. Butler has every right to hold his teammates accountable. Whatever feathers he ruffles in the locker room will settle down if the team continues to win games.

What interests me is how Butler’s payday, and his new self-perception as the team’s leader, has impacted his style of play on the court.

Jimmy is shouldering the biggest load of his career. His 23.6% usage rate is a career-high, as are the 15.5 field goal attempts he’s averaging each night. He’s driving to the basket 7.2 times per game, up from 5.1 a season ago. He’s working as the ball handler in pick and rolls 6.5 times per game after averaging just three possessions per game last year. Butler is taking on all this offensive responsibility while literally covering the most ground per game in the NBA for the second year in a row.

This massive burden that Butler has put on himself, admirable as it may be, is negatively impacting his offensive efficiency. Butler is shooting 44.7% from the floor after averaging 46.2% last year. And after averaging 37.8% on three attempts from beyond the arc in 2014-15, Butler is now connecting on just 32% of his 3.5 attempts per game.

Butler’s two point field goal percentage has held steady – 48.4% last year and 48.5% this season – despite the sub-optimal shift in where those shots are being taken. After taking more than a third of his shots from within three feet last season, Butler is attempting just 30% of his field goals in the restricted area. Butler is also turning more of his field goal attempts into the much maligned long two. 24.7% of his shots come from between 16 feet and the arc, up from 21% a year ago. Butler is shooting a respectable and career high 43.5% from this zone, but an increase in these shots has other adverse effects on his production.

The increase in mid range shots accompanies a decrease in some of the things that made Butler so dangerous last season. Jimmy’s .471 free throw rate is nothing to sneeze at, but it is at a three year low after he went to the line on over half of his field goal attempts last year. The increase in three point and midrange shots has left Butler further away from the hoop than ever before, and he’s seen his offensive rebound rate plummet to a career low 2.5%.

A season ago, Jimmy Butler was one of the most efficient players in the league driving to the basket and running pick and roll. But the increase in usage has been accompanied by an efficiency decline. Butler has improved his ability to score off of drives, shooting 45% compared to just 39.6% last year, but that’s the only aspect of the play he’s better at. Butler’s impressive 9.9% assist ratio has fallen to 7.4% this season, and his turnover percentage has jumped from 7.8% up to 10.6%, the ninth highest rate of any player who drives five or more times per game.

The drop in efficiency is not surprising considering the substantial jump in attempts. And the fact that Butler is actually shooting a higher percentage is very encouraging, as I would assume his decision making will continue to improve as he becomes more and more comfortable getting to the rim.

The one development in Butler’s game that has bothered me most this season has been his propensity to catch a pass, pause, dribble, dribble, call for a screen, a re-screen, and then force up a contested shot. I wrote a few weeks ago about how Derrick Rose has not embraced the Hoiball concepts I expected to see implemented in the offense, but he is not the only culprit. Jimmy Butler took just one shot per game last year after holding onto the ball six or more seconds. He’s attempting 2.7 of these shots this season.

Butler’s status as offensive alpha dog does not give him the right to halt the offense and hunt for his own looks. He needs to smarten up and realize that embracing quick ball movement and trusting the system will put him in the most advantageous positions to score.

I don’t mean to rag to hard on Jimmy; he’s the best two-way shooting guard in the NBA, and I hope he remains a Bull for his entire career. After an admittedly down year on the defensive end, Butler has played with a renewed ferocity this year. The dip in free throw and rebound rate are excusable for a player who is undoubtedly exhausted at each game’s conclusion.

But for Jimmy to really lead this team, he needs to do a better job of blending into the offense. If he doesn’t have the energy to make it to the basket, he needs to keep the ball moving and pass up long jumpers. When that begins to happen, this very deep Bulls team will begin to score at a rate that will satisfy fans and the front office.

3 thoughts on “Jimmy Butler is evolving, and not just his personality”