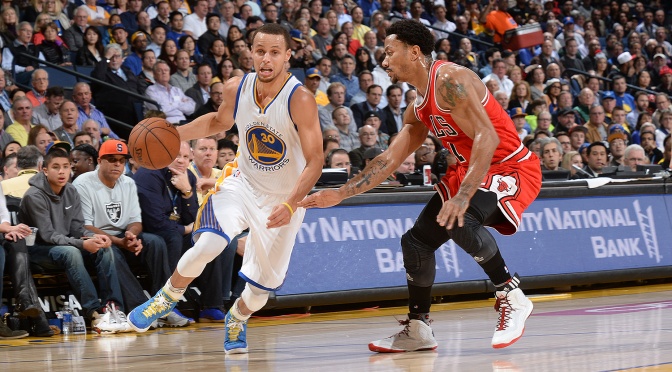 There are generally two camps when it comes to Derrick Rose: those who tear him down at any chance and want him gone, and those who still hope he will rise like a phoenix from the ashes into his former MVP self. The latter is poetic, though wholly unrealistic. And the former confuses negativity for pragmatic truth. Let’s not fool ourselves: the Chicago Bulls need Rose’s athleticism, scoring, ball handling, and play-making abilities in clutch situations if they want any chance at a postseason run in the next couple years. But they also need him to be smart and efficient, something he was unable to do when the season began.

At the outset, Derrick struggled with bad luck and bad health once again, facing an orbital contusion that would have him playing with a mask to start the season. He did not play well, to put it simply. In November, he averaged 13.3 PPG on 35.3 FG%. In December, 15.3 PPG on 41.4 FG%. He was at the bottom of the list in key statistical efficiency categories for starting guards; in November, he had a PIE of 8.9, ranking 30th out of 40 players with at least 10 games played of 30 MPG. Early in the season, no player besides perhaps Kobe Bryant was using such a staggering amount of possessions at such inefficient levels.

This kind of production can be deceiving if his effectiveness is low, but his impact performance over the last two months has upgraded too: February and March finds Derrick with a PIE of 13.1, ranking 11th out of 51 qualifying players*. That places him among Kyrie Irving, Goran Dragic, Jeff Teague, DeMar DeRozan, Kemba Walker, and Isaiah Thomas. Much better.

This trend is no fluke – Derrick has changed part of his game to reduce the frequency of high impact collisions at the rim by developing what has become a reliable mid-range bank shot. Normally, we might scoff at this shot type as being one of the least efficient in the game, but Rose has become so consistent at hitting these that it feels like nearly a sure thing and is a nice component to the Bulls’ offense.

On average, he’s hit a remarkable 62% of shots classified as a jump bank shot or pull up bank shot. His other deadly mid-range threats add to the texture of his offensive weapons: floating jumpers (48%), pull-up jumpers (49%), and step-backs (52%). Over 20% of Derrick’s shots this year have come from these mid-range types – just enough to keep the defense honest. It has become such a reliable threat that teams have adjusted to play up on him when he gets below the free throw line, which has allowed him to use his speed and athleticism to drive for a layup, of which he’s converted 62% since the new year.

That said, one concerning area is that Rose’s Usage Rate is still sky-high; ranking sixth at 29.6%*, but only boasting an eFG% that is in the upper half of players at 40.0%. Still, Rose’s trainwreck start of the season remains a big factor in his season-long statistics. Further, in clutch situations (defined by NBA.com as ahead or behind by five or fewer points with less than five minutes to play), Derrick’s PIE jumps to 18.2, good for ninth out of 43 players who have played in five or more clutch game situations in February and March, yet another encouraging sign.

*Among players with at least 15 GP in February and March, averaging at least 25 MPG

It is well documented that Derrick has been recovering from two major knee injuries and that his body has betrayed him in one way or another these past few years. People in one camp have asked to give him more time to return; those in the other, feeling his time is over. But what if we just look at him as he is now? He’s easily the best point guard the Bulls have to offer, and the impending free agent point guard market is weak. Instead of using an ax to cut him down, let’s use a chisel to refine his game.

It’s time we look at Rose at face value, and stop talking about seeing “flashes of the old, vintage Derrick Rose,” (I blame you, Reggie Miller) and similarly, stop dismissing him as a half-man, half-machine, bionic, over-the-hump dead beat. He’s a reliable player with incredible athleticism who’s still improving, and the Bulls desperately need him to keep progressing. We may not see a renaissance, but it’s fun watching him reinvent his game, and we’ll be there with him every step of the way.