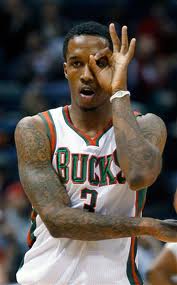 As the NBA has evolved in the last twenty years, the emphasis on positional importance has changed drastically. Whereas championship contenders used to be able to be built around a low post threat with a back to the basket game, now the league is based around perimeter players who operate primarily out of a pick and roll offensive system. Rule changes, specifically the ban of hand checks, have made slowing down ball handlers harder than ever, leading teams to create intricate overload defensive schemes to counter a dangerous PnR team.

It has taken time, but the rule changes have had a trickle down effect on the talent pool in the NBA. More and more of the top players emerging from the high school and collegiate ranks are small, quick, dynamic point guards, the type of players who have benefited greatly from the (not so) new rules.

You could reasonably say that in today’s NBA there is now a glut of talented point guards. I will now, off the top of my head, reel off great point guards in this league:

That is, in no particular order, a list of the ten best point guards in the NBA. With the exception of the quickly declining Nash, I would choose anyone on this list to be my point guard for the next 5-10 years and be reasonably happy. I would even consider putting Jrue Holiday or Damian Lillard on this list, but I figure people would get mad.

So where does that leave Brandon Jennings?

Jennings is without a doubt a talented player. You don’t just score 55 points in an NBA game accidentally, a feat Jennings managed when he was just a rookie. But the problem with Jennings is that despite all the early promise that swirled around him, he has become rather stagnant in his development as a point guard and overall player.

Those years represent Jennings’s first year in the league and his most recent 2013 campaign. The numbers are strikingly similar, with minimal upticks in scoring and FG%. Probably the biggest area of disappointment in the lack of development in Brandon Jennings is his low assist totals. Jennings, for all his gifts as a scorer, just does not consistently find teammates for open shots. And while Jennings does average an impressive 1.5 steals per game, the Bucks are generally worse off defensively when Jennings is on the floor.

In a different era, the raw numbers that Jennings is posting would warrant a big pay day after the restrictions of the rookie salary scale are lifted. Jennings’ ability to score as a point guard was once thought of as being a rare and valuable commodity for a team. But, as Stavi will tell you, when there is too much supply, the price of the product decreases.

Jennings right now is surveying his options and probably believes that teams’ lack of interest in him is due to his restricted free agency. For anyone unaware, a team has the right to match any offer that comes in on a restricted free agent whose rights they possess. Due to various cap rules, putting a bid in on a RFA can hamstring a team’s salary cap for several days, and may end up with nothing to show for it. Jennings has the option of signing a one year qualifying offer with the Bucks for $4.5 million before hitting unrestricted free agency next offseason, which will be the craziest one we’ve seen since 2010.

But Jennings’ logic is a little flawed. Just last season, aggressive runs were made at Roy Hibbert, Nic Batum, Omer Asik, Jeremy Lin, and Eric Gordon, all restricted free agents. It seems that the RFA tag has less to do with teams unwillingness to make an offer ad has more to do with how teams project Jennings’ development over the next 4 years. Jennings is going to have to show that he is ready to take a massive step as a playmaker this upcoming season in order to receive the type of contract he believes he deserves.

4 thoughts on “Brandon Jennings and the Value of Point Guards”